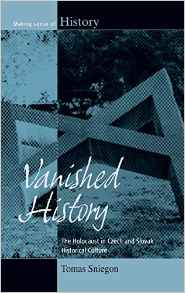 Bohemia and Moravia, today part of the Czech Republic, was the first territory with a majority of non-German speakers occupied by Hitler's Third Reich on the eve of the World War II. Tens of thousands of Jewish inhabitants in the so called Protectorate of Bohemia and Moravia soon felt the tragic consequences of Nazi racial politics. Not all Czechs, however, remained passive bystanders during the genocide. After the destruction of Czechoslovakia in 1938-39, Slovakia became a formally independent but fully subordinate satellite of Germany. Despite the fact it was not occupied until 1944, Slovakia paid Germany to deport its own Jewish citizens to extermination camps.

About 270,000 out of the 360,000 Czech and Slovak casualties of World War II were victims of the Holocaust. Despite these statistics, the Holocaust vanished almost entirely from post-war Czechoslovak, and later Czech and Slovak, historical cultures. The communist dictatorship carried the main responsibility for this disappearance, yet the situation has not changed much since the fall of the communist regime. The main questions of this study are how and why the Holocaust was excluded from the Czech and Slovak history.

Tomas Sniegon is a Lecturer in European Studies at the University of Lund, Sweden. His research focuses on Holocaust memory in various historical cultures and on the development of the Soviet forms of Communism in Europe during the Cold War.