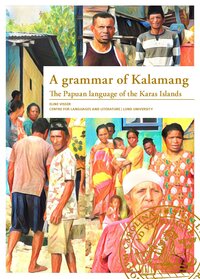 Eline Visser
A grammar of Kalamang. The Papuan language of the Karas Islands
2020

This thesis is a grammar of Kalamang, a Papuan language of western New Guinea in the east of Indonesia. It is spoken by around 130 people on the biggest of the Karas Islands. This grammar is based on 11 months of fieldwork. The primary source of data is a corpus of more than 15 hours of spoken Kalamang recorded and transcribed between 2015 and 2019.The grammar covers a wide range of topics beyond a phonological and morphosyntactic description, including prosody, narrative styles, and information structure. More than 1000 examples illustrate the analyses, and are where possible taken from naturalistic spoken Kalamang. The descriptive approach in this grammar is informed by current linguistic theory, but is not driven by any specific school of thought. Comparison to other eastern Indonesian languages is taken into account whenever it is deemed helpful. Kalamang has several typologically interesting features, such as unpredictable stress, minimalistic give-constructions consisting of just two pronouns, aspectual markers that follow the subject, and the NP and predicate – rather than the noun and verb – as important domains of attachment.This grammar is accompanied by a an openly accessible archive of linguistic and cultural material (tinyurl.com/theKalamangCollection) and a dictionary (dictionaria.clld.org/contribu-tions/kalamang), and serves as a document of one of the world’s many endangered languages.