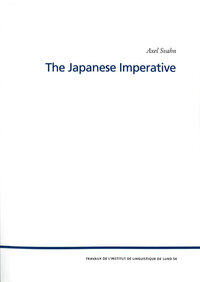 Imperatives are the chief grammatical exponents of one of the basic types of utterance: statements, questions, and commands. This thesis investigates how imperatives in Japanese fit into the cross-linguistic scheme of things and, more importantly, whether and how they stand out. Its aim is to advance our understanding not only of Japanese imperatives, but of imperatives in general. The Japanese Imperative offers a monographic treatment of Japanese imperative constructions from the perspective of general linguistics, making use of a range of indigenous sources as well as recent developments in the typology and semantic theory of imperatives and directives. The subject relates to several fields, such as linguistic typology, the semantics-pragmatics interface, and language change. A terminological apparatus for the description and analysis of imperatives and directives is provided, including the proposal that the range of conventional directive strategies in a language be termed its ‘directive system’. Among other contributions, the thesis presents a layered model of semantics-pragmatics interaction in Japanese imperatives. The model is inspired by the indigenous as well as the general linguistic traditions. Japanese imperative constructions are, in addition, discussed from a diachronic viewpoint. The shifting realization of directivity in Japanese is accounted for in terms of processes that underlie historical change throughout the languages of the world.