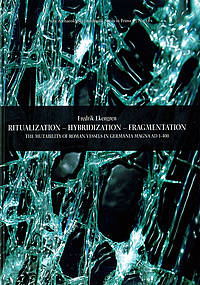 This book deals with the transformation of imported Roman vessels in Germania Magna during the Roman Iron Age, 1-400 AD. The concept of transformation in this context refers to the various ways these objects were interpreted, physically altered and consequently changed with regard to their function and meaning. Roman vessels in Germanic contexts are often regarded as evidence for Rome’s economic and socio-political influence on the tribes beyond the imperial boarders. Some scholars interpret them as an imitatio imperii, that is, as expressions of a Romanized lifestyle among the local elites. In this book, however, it is argued that imported objects must be studied using perspectives that acknowledge interpretation and transformation as central elements in cultural interaction. It revolves around three case studies. The first one, on ritualization, investigates how vessels of Roman origin were utilized in Germanic funerary rituals. The second case study on hybridization focusses on the combination of actual Roman vessels or vessel forms with local stylistic features, resulting in new expressions in the material culture. The third study deals with the fragmentation of glass, more exactly, the intentional deposition of glass fragments in graves. Based on these cases, the book explores what happens when a category of foreign objects is appropriated by a society, what happens in the encounter between local traditions and new social situations and new material culture, and what those encounters result in.