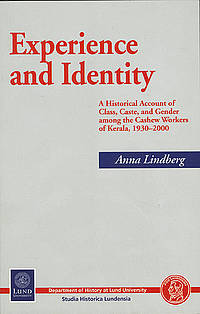 Anna Lindberg
Experience and Identity. A Historical Account of Class, Caste, and Gender among the Cashew Workers of Kerala, 1930–2000
Studia historica Lundensia 3
2001

Several generations of women have worked in the cashew factories of the South Indian State of Kerala from 1930 to the present. This group challenged the stereotypical view of Third World women because its constituents were organized into unions, worked in the formal sector, and were literate. Cashew workers have always comprised a majority of the working class in Kerala and today number some 200,000.
The historical background for this thesis has been the "Kerala Model", i.e., the political context of a state known for its radicalism, redistribution of resources, and high social indicators for citizens (men as well as women). The analysis contained herein addresses change and continuity, not only with regard to material "realities", but also in terms of discourses and ideologies. Among the main themes followed over the period 1930-2000 are the organization of work in the factories, wages, trade unions, and marriage. Weaving through all of these are the ever-present issues of class, caste, and gender. lnterdisciplinary methodology on different levels has been used in an attempt to elucidate the center of women's experience and identity. Archival documents and interviews have comprised the principal sources of information. In-depth interviews have been given precedence, resulting in a preponderance of quotations of "women's voices".