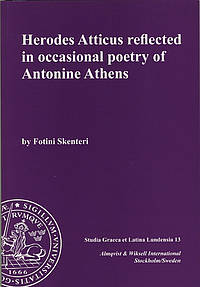 The subject of this book is Herodes Atticus, the enormously rich Athenian of the second century AD, who became one of the politically important persons in this city and who was one of the leading intellectuals of his time in his capacity of sophist, orator, and teacher to students from all over the Roman Empire. Evidence of his munificence were scattered over Greece and Italy, in the shape of statues, buildings and shrines that he sponsored. They contributed to creating an image of a benevolent and generous benefactor.

This book focuses on one of the tools that he used for disseminating his image, namely poetry. The approach of this study is different from previous research in the sense that it is totally focused on verse inscriptions connected to Herodes Atticus and found in two different regions of the Roman Empire. Those inscriptions have been studied previously, but they have almost exclusively been used as sources for Herodes’ biography and treated as reflections of his person. In this study, the texts are also treated as illustrations of how occasional poetry functioned in the contemporary society and of how an individual like Herodes exploited the poetic medium in order to enhance his own person, his family and his endeavours.

By a careful study of the epigrams in question, the somewhat stereotype picture of Herodes becomes modified, and a complex figure appears. Without exaggeration, Herodes Atticus was one of the most interesting personalities in Athens of the Early Roman Empire.