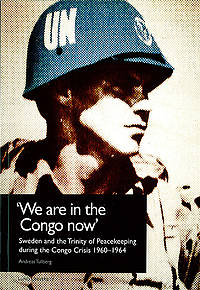 Opération des Nations Unies au Congo (ONUC), 1960–1964, is known to be one of the largest and most violent peacekeeping missions in UN history. From the outset of the operation until the end in 1964, Swedish battalions served in the ONUC trying to retain law and order in the Congo. Especially during the autumn of 1961 and again in the last days of 1962 political tension in the province of Katanga escalated into local war, which directly came to involve the Swedish battalions. In Sweden the events also served to challenge the understanding of what peacekeeping was, or ought to be, as well as raise questions about Sweden as a peacekeeping nation.

In ‘We are in the Congo now’, Andreas Tullberg analyses the contemporaneous experiences of the Swedish participation in the ONUC. This is done by examining newspapers, political rhetoric and military sources in order to see how and why the consensus about Swedish ONUC participation in 1960 was challenged by the events in the Congo.

‘We are in the Congo now’ is Andreas Tullberg’s PhD dissertation.