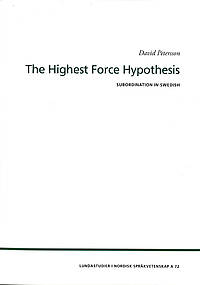 This study discusses subordination in Swedish from the perspective of three construction types that involve clauses that have traditionally been notoriously difficult to classify as unambiguous main or subordinate clauses: "embedded V2"-constructions, direct speech constructions, and exclamatives.

A general hypothesis regarding subordination and "superordination" is proposed: The Highest Force Hypothesis. The formulation of this hypothesis draws on seminal work by den Besten (1983) and it is argued that the status of a Swedish clause as main or subordinate i directly linked to the position of the finite verb:; verb movement takes place in main clauses, but not in subordinate clauses. Such a proposal naturally raises a number of questions that are discussed in this work.

It is shown that the hierarchal status of the clauses involved in the three constructions, "embedded VD"-clauses, direct speech, and exclamatives, can be given an unified account within the framework of The Highest Force Hypothesis. An important point in the proposed analysis is that certain alleged hypotactic relations are better viewed as textual relations holding between syntactically independent main clauses.

The overarching aim of this study is to obtain a deeper understanding of super- and subordination on a general level and The Highest Force Hypothesis is applied not only to clauses, but also to non clausal structures.