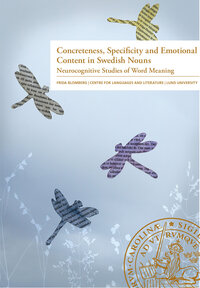 The present thesis investigated Swedish nouns differing in concreteness, specificity and emotional content using linguistic, psycholinguistic and neurolinguistic methods. The focus of Paper I was a semantic analysis of discourse produced by a person with a lesion in visual (left occipital) cortex. The results showed that the lesion site was related to with problems processing concrete nouns related to visual semantic features, as well as nouns with high semantic specificity. Paper II compared Swedish ratings of the cognitive psychological parameters imageability, age of acquisition and familiarity to English ratings, showing correlations indicating that ratings can be transferred between the two languages. Suggestions for constructing a Swedish psycholinguistic database were also outlined. In Paper III, four noun categories differing in specificity and emotional arousal (SPECIFIC, GENERAL, EMOTIONAL, ABSTRACT) were compared using a dichotic listening paradigm and a concrete/abstract categorisation task. EMOTIONAL nouns were shown to be processed faster than the other noun categories when presented in the left ear, possibly indicating more right hemisphere involvement. In Paper IV, PSEUDOWORDS as well as SPECIFIC, GENERAL, EMOTIONAL and ABSTRACT nouns were compared during lexical decision and imageability rating tasks using electroencephalography (EEG), targeting the event-related potentials (ERPs) N400 and N700, previously shown to be modulated by concreteness. On the assumption that abstract nouns have a larger number of lexical associates than more concrete nouns, N400 amplitudes were predicted to be smaller for abstract nouns than for concrete nouns. This prediction was supported by the results. Notably, even SPECIFIC and GENERAL nouns were observed to elicit different N400 amplitudes, in accordance with their hierarchical relationship in lexical semantic models. Bringing together theories and methods from linguistics, cognitive psychology and neuroscience, the present interdisciplinary thesis provides insights into word semantics as regards differences related to the cognitive dimension of concreteness and its relation to sensory and emotional meaning features.