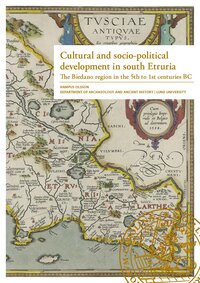 Hampus Olsson
Cultural and socio-political development in south Etruria. The Biedano region in the 5th to 1st centuries BC
2021

By the 1st century AD, the Etruscan culture had been completely absorbed by Rome. Etruscans were now fully integrated and to be found at every level of Roman society, even at the very top. Etruria itself was naturally also affected. Roads were constructed connecting the remote areas on the peninsula, and large agricultural estates sprang up everywhere in the countryside, effectively changing the traditional ways of farming. To have an idea of how this came about it is necessary to venture further back in time. In the 4th century BC, a process with no precedents started on the Apennine peninsula. City-states started to expand, subjugating their neighbours until fewer and fewer remained; a development, which eventually would bring about the first unification of Italy, an Italy controlled by Rome. What did this expansion look like and what were the mechanisms behind it? The town of Blera, and the Biedano region, is located in south Etruria. After the fall of Rome’s great Etruscan rival Veii in 396 BC, the area found itself bordering Roman controlled territory, and before long the Biedano region would become the theatre of military conflicts between Rome and the great Etruscan city of Tarquinii. Who were the leading families of the region, what was their role in the development, how did they cope, and how did they play their cards in order to remain at the apex of society? In this study, Hampus Olsson explores these processes and how the people living in a small peripheral region, situated on the fringes of the Etruscan heartland, was affected.