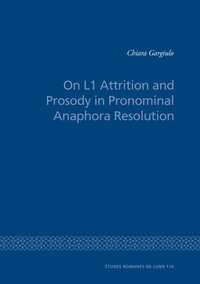 This thesis is a collection of four studies on pronominal anaphora resolution with a focus on first language (L1) attrition and prosody. In Study I, we explored the temporariness of attrition effects on anaphora resolution in L1 Italian speakers who moved to Sweden after puberty (i.e., late bilinguals). An experimental group of 20 late Italian-Swedish bilinguals and a control group of 21 Italian monolinguals completed a self-paced interpretation task twice, and we measured response preferences and response times. In Study II, we investigated how L1 Italian and L1 Swedish speakers use pause features and prominence cues to resolve globally ambiguous anaphora sentences, and whether their patterns in the use of prosody mirror the divergent coreference patterns in the two languages. 28 L1 Italian speakers and 28 L1 Swedish speakers completed a speech production task, in which we analyzed the inter-clausal pause length and the pronoun’s degree of prosodic prominence, and a control interpretation task, in which we considered response preferences. Study III represents a continuation of Study II, since we examined a group of 18 late Italian-Swedish bilinguals, who completed the same experimental tasks of Study II. Study IV is a theoretical investigation, in which we discussed previous inconsistent findings on anaphora resolution in light of the interplay between hierarchical structure and linear order of a sentence. The results of the four studies suggest, first, that anaphora resolution may also affect null pronouns, and that task-learning effects should be taken into account for further research on L1 re-immersion. Second, they suggest that inter-clausal pause and prosodic prominence of pronouns are likely to break the canonical coreference pattern, both in a null subject language and in a non-null subject language. Third, the findings also reveal that L1 attrition affects prominence patterns and pause features in pronoun resolution. In particular, the longer the residence in the foreign language (FL) environment, the higher the probability that late bilinguals adapt to the FL patterns when they use prosody to resolve anaphora sentences. Fourth, both monolinguals and bilinguals are sensitive to the interplay between hierarchical structure and linear order of anaphora. However, they employ different strategies to interpret an anaphora sentence, in which hierarchical structure and linear order favor different antecedents. The implications of the findings are discussed in light of the role of processing and cross-linguistic influence (CLI) in L1 attrition, as well as in light of the use of prosodic cues to resolve an anaphoric reference, both in relation to the Null Subject Parameter and in relation to L1 attrition.