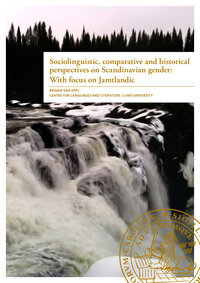 This thesis focuses on Jamtlandic (or jamska), a language variety spoken in northern Sweden at the Norwegian border. Jamtlandic maintains the three-gender system from Old Norse (with masculine, feminine, and neuter), but shows signs of influence from the two-gender system of Swedish (in which the masculine and feminine collapsed into a single ‘common’ gender). The first study of this thesis looks closely at the social factors that influence Jamtlandic speakers’ gender usage, while the second and third studies investigate gender assignment principles for Jamtlandic and five other Scandinavian languages. Together, these studies show that the feminine gender has a weaker status than the masculine and neuter genders. This can be related to the overarching trend for Germanic languages to lose the feminine gender.