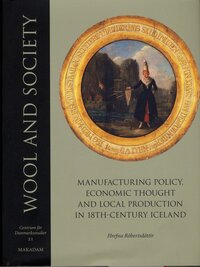 Flax spinning, domestic workshops, putting-out production and increased exports are all changes that affected wool production in Iceland following the introduction of manufacturing workshops to the country in the late 18th century. In this book, wool production is used as a key to understanding 18th-century society, touching, as it does, on a wide range of subjects such as farming practices, occupations, division of labour, production techniques, export, and efforts to increase production within the rural society.
Hrefna Róbertsdóttir, historian, explores economic thought in Iceland and Denmark in the 18th century and relates it to local wool production in Iceland in the second half of the century. In the process, she sheds new light on 18th-century society and draws attention to various economic, social and moral aspects of manufacturing. Ultimately, she views the introduction of manufacturing in the 18th century as internal utilisation within the old order, rather than as a harbinger of the future changes and industrialisation of the 19th century.
Wool and Society – Manufacturing Policy, Economic Thought and Local Production in 18th-century Iceland is a doctoral thesis in history, submitted to the Department of History at the University of Lund in Sweden.