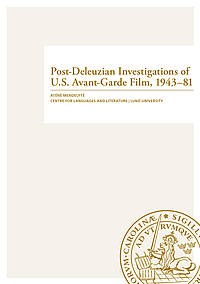 The aim of this dissertation is to investigate a number of U.S. avant-garde films using Deleuzian film-philosophy in order to describe their thought. I develop the taxonomy of cinematic images created by the French philosopher Gilles Deleuze by introducing a new type of image. The notion of the sobjective image I conceptualize points to the immanent semiosis that characterizes certain films. The sobjective image describes the individual images and the entire films that objectify subjectivity and create idiosyncratic mental film-worlds. These films shape individual realities according to a single subjective mode. I also introduce the conceptual cartography of film-worlds, an analytical tool intended to help define the ontology of various filmic wholes (film-worlds) in order to highlight their distinctness. The cartography aids in explaining how films dominated by different Deleuzian and post-Deleuzian image types differ in their film-worlds, ontology, and metaphysics. Furthermore, I coin the concept of the metaphysics of technique and subsequently argue that various cinematic techniques (montage, mise-en-scène, framing, costuming, lighting, superimposing, sound editing, etc.) do not only serve to create the physics of a given film-world (the extended phenomena), but define the metaphysics (the nature) of that reality. I then proceed to close-read fourteen avant-garde films by describing their sobjective principles and by bringing out their bearings on a number of important philosophical problems. These films cluster around four philosophical themes, which are shaped into four chapters focusing on childhood, selfhood, sexuality, and ritual and art.