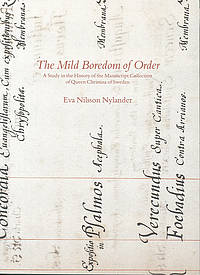 Eva Nylander
The Mild Boredom of Order. A Study in the History of the Manuscript Collection of Queen Christina of Sweden
Bokhistoriska skrifter 8
2011

This study examines how the Latin manuscript collection of Queen Christina of Sweden was formed, what function it served for the queen and for others, and how various attempts to impose order on it reflect different epistemological traditions. A recurring theme of the study is the creation of order and the title, The Mild Boredom of Order, a quotation taken from an essay on book collecting by Walter Benjamin, refers to this pervasive theme. The theoretical and methodological basis is book historical, and accordingly characterized by a sociological orientation, where special interest is shown the interplay between many agents, and the concept of order is understood in a number of interrelated ways. The traditional and prevalent portrait of Queen Christina as a book collector is called into question through the shifting of focus from the manuscripts as carriers of an intellectual contents, to the relevance of books and libraries in the construction of the image of Queen Christina. Particular attention is paid to the concept of historical collection related to the Codices Reginenses Latini, and to catalographic policies and practices.

The Latin manuscript collection of Queen Christina, the object of the study, was originally formed in Stockholm by the young queen during her ten years of reign. It is now housed in the Vatican Library as the Fondo Reginense Latino, and the manuscripts as Codices Reginenses Latini, and it is the result of the collective zeal, aspirations, ambitions and ideals of many individuals and institutions. In turn these ideals have been conditioned by a great variety of factors: from private priorities, to visions of the ideal library, models of library management, and political turmoil and war. As opposed to what the name of the collection declares, the Fondo Reginense Latino does not consist solely of manuscripts that have belonged to Christina. Instead several groups of manuscripts with varying provenances, have been added to the collection over time, from 1690 and until today.