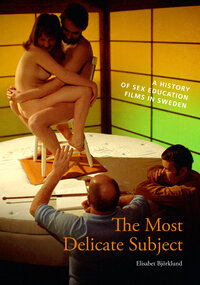 In 1969, the sex education film Language of Love was a great success at Swedish movie theaters. Containing explicit representations of sexual acts, the film attracted over one million Swedish movie-goers and was soon followed by no less than three sequels and a "best-of" compilation film. Having since become part of the Swedish cult canon, the films are today probably the most widely seen Swedish sex education films of all times. But Language of Love was not the first sex education film in Sweden. In fact, films of the type had existed on the Swedish market ever since the silent era. In The Most Delicate Subject, Elisabet Björklund traces the history of sex education films in Sweden up until the late 1970s. Situating the films in context of the developing Swedish welfare society and the expanding presence of sexuality in the public sphere, Björklund explores how the films were shown, handled by censors, discussed in the media, and what they express in terms of the changing norms and ideas about sexuality. Studying feature-length films shown in cinemas as well as shorter films aimed at the schools, The Most Delicate Subject provides a broad and fascinating history of a genre that has constantly been the object of considerable controversy, from its origin in the early twentieth century to the sexual revolution of the 1960s and 1970s.

Elisabet Björklund is a film scholar at the division of Film Studies at the Centre for Languages and Literature, Lund University. The Most Delicate Subject is her doctoral dissertation.