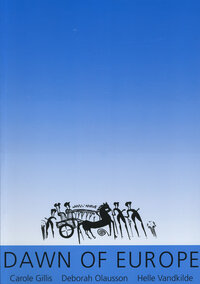 For most of us, the word ‘European’ brings to mind a number of nations coexisting in a more or less single land area bounded by the Atlantic Ocean to the west, the Mediterranean to the south, and the North Pole to the north. The boundaries to the east are a little more diffuse. Since the inception of the European Economic Community (now the European Union) in the 1960’s, these nations have been bound together not only geographically but also economically, politically and to an extent, socially. As a result, many of the people living in Europe have grown to think of themselves as ‘Europeans’. Has this always been the case? A look at recent history shows that many of the current nations in Europe were not created until the 19th century, and the boundaries are constantly changing. But if we could go far enough back in time, would we find common roots, traditions, beliefs and lifestyles that unite the people living here, a common culture that we can call ‘European’ and point to when explaining the mentality of contemporary inhabitants? Dawn of Europe is written by three archaeologists but it does not require any previous knowledge of archaeology. It is a summary of some modern research results regarding prehistoric and early historic cultures in today’s Europe. Developments in three broad geographical areas—southern, central and northern Europe—are compared in order to determine if shared impulses, innovations and ideas can be identified. Two major watershed events in each of the three areas are examined; first, the innovation of agriculture, animal domestication, and permanent settlement, and second the introduction of metals and metallurgy. This is followed by an examination of one further development which might have resulted from the advent of these phenomena: namely, the rise of elites and state formation. The book discusses whether these particular phenomena in the history of Europe can shed light on the question of the existence of a European cultural identity.