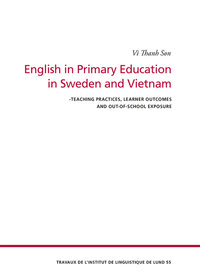 This thesis investigates the interaction between teaching and learning of English in young learners in Sweden and in Vietnam, bringing together two perspectives – teaching and learning – that are seldom compared between cultural contexts. The main focus of the study was to examine procedural and declarative knowledge of English grammar.
A number of Grade 5 English lessons in primary school classrooms in Sweden and Vietnam were observed and analysed using the COLT scheme (Communicative Orientation of Language Teaching). The pupils’ proficiency in English was assessed using elicitation instruments that captured procedural and declarative knowledge of English subject–verb agreement. In addition to this, the learners’ out-of-school exposure to English was investigated.
The results show that the Swedish learners, in addition to communicating more in the classroom, also had more exposure to English outside the classroom. The Vietnamese learners, on the other hand, had limited exposure to English outside school, except in the form of private tutors, and received more focus-on-form instruction in the classroom. Analysis of the learners’ grammatical knowledge showed that most of the Swedish learners were able to produce 3-sg-s, but could not describe the rule. The opposite result was found among the Vietnamese learners, who were often able to give the rule but did not produce 3-sg-s. The finding that the procedural and declarative knowledge of the learners was not correlated has implications for language teaching, and the results of this thesis may contribute to a better understanding of the L2 acquisition of grammar.