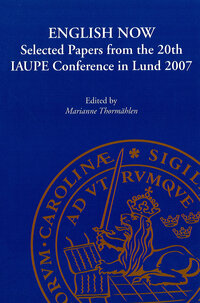 In August 2007, about 200 senior researchers in the field of English, language and literature, spent a week in Lund taking the temperature of their subject. Nearly 150 papers were presented in 19 conference sections. This volume contains a lively selection, chosen by the 37 Section Chairs as saying something about where research in the discipline is heading. Also included are the two plenary lectures about the state and future of English in the academy by Elizabeth Traugott (language) and Helen Vendler (literature).

A common feature unites this diverse collection: English literature and language as a vital concern for real people, all over the world and in the past as well as the present. Here ‘English’ reaffirms its human credentials, moving forward with fresh confidence and enthusiasm.