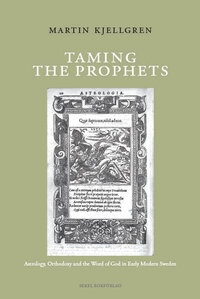 Martin Kjellgren
Taming the Prophets. Astrology, Orthodoxy and the Word of God in Early Modern Sweden
2011

In may 1619, the Finnish astrologer Sigfridus Aronus Forsius (d. 1624) was examined by clerical authorities. In de verdict, astrology was rejected as a pagan craft, forbidden for anyone who wanted to be called a Christian.
Still, astrology was inseparable from the scholarly conception of the world. The principles of astral influence were indispensable in physical theory and in medical practice. In the Reformation debate, astrology had also been used as a prophetic method, revealing the World of God as it was displayed in the Book of Nature. Some of the orthodox critics of astrology in Sweden had even practiced the art themselves and gained ‘abundant maintenance’ from it. Foremost among them was Laurentius Paulinus Gothus (1565–1646), the grave and vehemently orthodox bishop of Strängnäs, who as an academic in the 1590s had published astrological prognostications.
Challenging the view of how clergymen of the Reformation contributed to the so-called ‘disenchantment of the world’ by rejecting astrology and other ‘occult’ sciences, this book offers new perspectives on early modern intellectual debate. With focus on the issue of astrology, the displacement of the limits between allowable and illicit knowledge in the orthodox, Lutheran discourse, is set in context of social and political change in late sixteenth- and early seventeenth century Sweden.