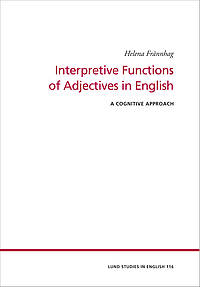 This book presents a theoretical discussion of the creation of meaning in language, with special focus on the functions that adjectives fulfil in this process. The discussion rests on a dynamic view of meaning and interpretation, according to which there are no fixed linguistic meanings – not even for single lexemes. Instead of symbolising meaning in a more or less static and ‘eternal’ fashion, linguistic items are assumed to effect the creation of meaning, and to shape meaning dynamically in the particular communicative event at hand, from some kind of underlying meaning potential.

The aim of the book is twofold: on the one hand, to outline a tentative theory of meaning creation and interpretive function in general; on the other hand, to present a theoretical discussion of adjective functions in particular, with the ultimate goal of providing a general framework from which more specific models for in-depth empirical research can be obtained.