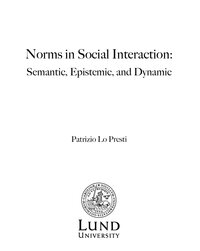 This dissertation examines people’s understanding of and action according to norms. Two models are distinguished: a cognitive and a non-cognitive model.

The cognitive model is characterized by requiring for people to understand norms and each other, and to act accordingly, that they have higher-order mental states whose propositional contents refer to the mental states of others and from these infer beliefs about what is normative and intentions to act accordingly. On the other, non-cognitive model, understanding norms and others and to act accordingly is understood as an embodied, situated, ecological, and enacted know-how. Such knowledge does not imply that people entertain mental states with propositional contents that something is a norm or that someone is in a certain mental state, from which they infer what to do; instead it presupposes certain embodied activities in the context of particular situations in social environments that people together participate in enacting. In this manner of learning by way of participation people can be said to know how to act together in accord to norms even if they do not know that that is what they do and even if they cannot state that an action is normative. This means that people can be understood to have an understanding of norms and each other, and to act accordingly, in circumstances that do not meet the conditions required on the cognitive model.