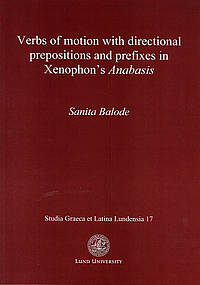 Languages tend to have a certain set of means, by which various types of semantic relations are expressed, among them direction. One of the peculiarities of Ancient Greek is that both verb prefixes and prepositions can serve this purpose. One may therefore pose the question what distinguishes prefixes and prepositions when they denote one of the fundamental directional relations, source, path or goal. Specifically, when the same lexeme is found both as a prefix and as a preposition denoting direction, it is interesting to investigate whether they are both used in all conceivable contexts and, if not, in what way their usage might differ.

The present thesis attempts to elucidate how the prefixes differ from the prepositions in their function of denoting direction, and what factors influence their choice in Xenophon’s Anabasis. At the same time, it is investigated how the descriptions of motion contained in this work can be categorised into expressions of source, path or goal. The thesis examines which of these three categories is represented by the highest diversity of directional elements and number of occurrences, and which receives the least emphasis.

An analysis is made of passages in all seven books of Xenophon’s Anabasis, where the depiction of the march of the Ten Thousand entails any form of motion events.