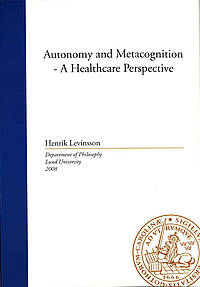 Autonomy and Metacognition is a philosophical study in two parts. The first part is an analytical examination of the cognitive aspects of autonomy, and the second part forms an application of the analysis to Swedish healthcare.

Part I of this dissertation examines the cognitive aspects of autonomy. The central question concerns what kind of cognitive capacity autonomy is. It is argued that the concept of autonomy is best understood in terms of a metacognitive capacity of the individual. Since the essential function of metacognition is control, it is argued that the concept of autonomy, understood as a metacognitive capacity, can be interpreted in terms of control. Issues arising from empirical data from neuroscience on functional, as well as impaired, metacognition, and on undermined autonomy, are dealt with. In order to determine whether an individual is autonomous, both the metacognitive status of the individual and the external setting must be considered, since they are in interplay and consequently influence each other.

In Part II, the analysis put forward in Part I is applied to Swedish healthcare. It is argued that the distinction between autonomy as a right and as a capacity must be explicit in order to understand what autonomy means and to deal with it effectively in healthcare practice. A discussion about whether or not the patient’s right to autonomy sometimes tends to be over-emphasized in healthcare is put forward. Special emphasis is placed on psychiatric issues such as deinstitutionalization and participation. Following the closure of the mental hospitals, deinstitutionalization and community-based care have become central topics in psychiatry. At the same time, the implementation of such care can be demanding for patients suffering from severe mental illness.

Finally, some suggestions concerning developments and improvements in Swedish healthcare, especially in psychiatry, where the concept of autonomy is important but problematic, are presented.