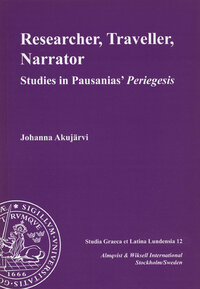 'As one has crossed a river called Dirce after the wife of Lycus… there are ruins of Pindar’s house and a sanctuary of Meter Dindymene… Their custom is to open the sanctuary on one single day every year. I managed to arrive on this day, and I saw the statue itself and the throne, both of Pentelic marble.' (Periegesis IX 25.3)

Who is the 'one' crossing the river Dirce in Boeotia? When does 'one' cross the river? How often? What is the relation between this 'one' and the 'I' whom we also encounter in this short quotation. Answers to these and similar questions are sought in the first part of this study of the second century AD literary work Periegesis Hellados (guide to, or description of, Greece) written by the otherwise unknown author Pausanias. The study is particularly focussed on the 'I', or Ego of the Periegesis, because of his prominence in the frame narrative.

Part two is devoted to the study of one specific historical theme among the many and multifarious narratives embedded in the frame narrative, viz. Greeks at war. This theme falls into three sub-themes: Greeks at war against Greeks, Greeks at war against Others, and Greeks and Romans. The aim is to reevaluate the current notions regarding the presentation of these themes in the Periegesis. Specifically, this study argues that, according to the Periegesis, war between Greeks was a normal state of things in the past, judgement is not passed on Greek communities if they did not fight outsiders in the past, and it is doubtful whether Greek freedom would be preferable to the stability of Roman government.