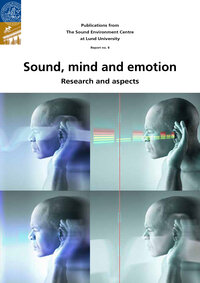 Human mind and emotion can be profoundly affected by sounds. In this interdisciplinary volume researchers from different fields take a look at connections between sound, mind and emotion, and ways of understand them.

In the spring of 2008 a series of interdisciplinary symposiums were arranged in Lund by The Sound Environment Centre at Lund University. The main subject was to further understanding of sound and sound environments and it´s influence on personal, emotional and psychological levels. The three different symposiums had different perspectives. The first one focused on how sound can affect us in times of emotional crisis, trauma or catastrophic events. The second topic
was to investigate aspects of how sound is perceived in states of mental disturbances of various kinds, and the third finally discussed implications of oversensitivity to sound – hyperacusis – as well as hearing impairments such as tinnitus.