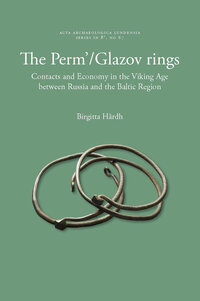 Birgitta Hårdh
The Perm´/Glazov rings. Contacts and Economy in the Viking Age between Russia and the Baltic Region
Acta Archaeologica Lundensia Series altera in 8° 67
2016

A group of distinctive Viking Age silver rings, sometimes described as neck-rings, sometimes as arm-spirals, have long been a cause of academic dispute. Where were they made and how were they used?
So far the scholarly perspectives have been limited to either the western or the eastern material, which has hampered interpretations.
This book deals with a greater number of these rings than hitherto, mainly dated to the 9th century, retrieved in present-day Russia, the Baltic region and Scandinavia. By analysing them it is possible to elucidate and discuss questions of contacts, economy and also craft traditions in the early Viking Age. It is especially worth noticing that these rings also seem to have been made according to distinct weight groups, which can also be associated with ancient weight systems. Obviously they are to be seen as value denominations or means of payment in large units. Th e similarity between rings in east and west indicates close relations between Scandinavia/the Baltic Region and the interior of Russia. Th is can probably be explained by the well-developed fur trade, aimed ultimately at the markets in the Abbasid caliphate and Byzantium. Only by considering the collected material in the east as well as in the west has it been possible to discuss interpretations of them.